If we name Sina Weibo , the chinese social network , many of you will not have it as located as when talking about general social networks on the Internet. Two names come to mind for most: Facebook and Twitter . Although the two American companies are the ones with the most active accounts worldwide, there are also other platforms with very significant user figures that are not attracting as much attention from the media and the Western public. That is the case of Sina Weibo , the leading microblogging network in Asia. 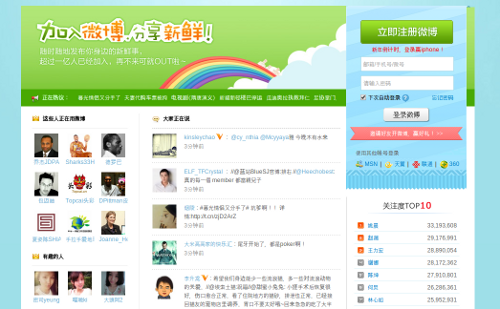 With more than 400 million users, the company is the social network par excellence in China , the country where the company is located and it seemed that they were not interested in expanding outside the Asian giant. However, recently movements are beginning to appear that seem to indicate the intentions of those responsible for Sina Weibo to get closer to a more international audience .

In recent weeks, the Chinese platform announced two novelties that may attract the attention of the rest of the world to them. First of all, the possibility of using the service in english when before it was only available in Chinese. Second, the agreement with international famous people like Brad Pitt or Aston Kutcher who have created a profile on Sina Weibo, reaching a large number of followers in a few days.

One of the biggest difficulties faced by this network for users from outside of China to register on the platform, is that they must comply with the strict laws of the Asian country and the continuous censorship to which user publications are subjected. It seems that the company is in continuous struggle with the Chinese authorities due to the requirements they make to delete its contents. This is demonstrated by the recent publication by the director of Sina Weibo of an article explaining the internal practices of censorship and the pressure to which they are continually subjected in this regard. Therefore, there are several voices that suggest that the company could move its headquarters outside of China to continue offering its service within the country in accordance with Chinese laws and that users from the rest of the world would not have to be subject to them.